The natural beauty of the flute evokes very powerful emotions. The traditional flute is social, not ceremonial, in nature and should always be treated with that in mind and spirit.

FireCrow has released 7 solo albums to date, 5 internationally. His accomplishments include a GRAMMYTM in the New Age category as a guest artist on David Darling’s “PRAYER FOR COMPASSION”, a GRAMMYTM nomination in the Best Native American Music Album category, 6 Native American Music Awards: Songwriter of the Year, Best Instrumental Recording and Flutist of the Year (2), Artist of the Year, and most recently, Song/Single of the Year; as well as a Telly award.
Ken Burns has honored FireCrow by utilizing his music for the documentaries “Lewis and Clark: The Journey of the Corps of Discovery” and “The National Parks: America’s Best Ideas”.
FireCrow’s music was also featured on PBS’ film, ““The War That Made America

FireCrow’s songs, “Creator’s Prayer” and “Wind in My Mind” were selected to open and close the best selling album Tribal Winds: Music from Native American Flutes on the
Earthbeat label. ” In addition, Fire Crow is a major contributor to several European releases, including Shaman, Circles of Life and Medicine Power on the German label, Sattva. Fire Crow was also a guest artist on Peter Kater’s 2007 album, Faces of the Sun, which earned a GRAMMYTM nomination for Best New Age Music Album at the 50th Annual Awards. 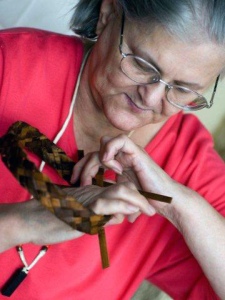 Lois Chichinoff Thadei is a master Aleut weaver. Aleut weavers of the Aleutian Islands have harvested, processed, prepared, and woven objects with fine natural grasses from these islands for centuries. Thadei was introduced to methods of this traditional art in a residential boarding school in Minnesota. She shared and learned cultural information there, often at night and in secret, with the possibility of being punished if she was discovered. She and others wove stitches underneath their blankets, if only to enjoy them for a few moments before they would rip them apart to avoid being punished. Thadei believes this experience taught her to make quick, certain movements, and to make each one count. Despite the cultural trauma and many other challenges faced by Thadei, her strong, unyielding passion to learn the art of Aleut weaving prevailed.

She has received many awards and honors for her work; including winning second place in woven regalia for a cedar rain hat in 1998 from Northwest Indian Art, second prize in basketry for a cedar utility basket in 1999 from Northwest Indian Art, and an award for a cedar utility basket in 2000 from the Urban Indian Art Show in Tacoma. Her art has been featured in exhibits in Russia, Oregon, and Washington. She was also invited to the Washington State Lt. Governor’s 2007 show at the Washington State capitol. Lois has also won a fellowship from the First Peoples Fund in 1999 and a First Peoples Fund Cultural Capital Fellowship, which allowed her to document Aleut weavings in private collections in Washington.

Thadei believes that this artistic tradition is a necessity for the well-being of her community. Grass woven products were used for many different objects with many different purposes including insulation, decoration, and cooking. Weavers wove the spirit of themselves and their communities into their works. These works are snapshots of history and the voices of past generations speaking to present and future generations.

As a recipient of the 2009 Apprenticeship grant, Thadei will teach the art of Aleut weaving to Shannon Huber. Huber was chosen because she has a passion for learning the art and a determination to constantly improve upon her weaving techniques. She also has a great willingness to teach others the skills she has learned. Thadei will be teaching Huber to work with both waxed linen and coastal grasses that are cured over the course of six to eight weeks. She will also teach her dyeing and the stories about and history of Aleut weaving. This will help Huber and others ultimately identify the strength of and pride in their culture through these baskets.

Huber has been exposed to Aleut folk art throughout her life. Her maternal great grandmother was a basket weaver and another ancestor told her stories of Anfesia Shapsnikoff, a well known Aleut weaver. It was difficult for Huber to find a teacher in the continental United States because Aleutian basket weaving is an uncommon art in this area. After searching for ten years, Huber found Thadei, or “Auntie Louie”. After this apprenticeship, Huber plans on researching local museums for Aleut art. She also wants to strengthen the weaving community by connecting Aleut weavers with weaving students. Both Thadei and Huber believe that teaching this tradition will again tie together younger and older members to learn, share, and connect through the art.

Thadei and Huber plan a public presentation in either Olympia or Tacoma next winter as a part of the project ”Elder’s Whisper”, which documents some of the older Aleut weavings that are part of private collections in Washington State. 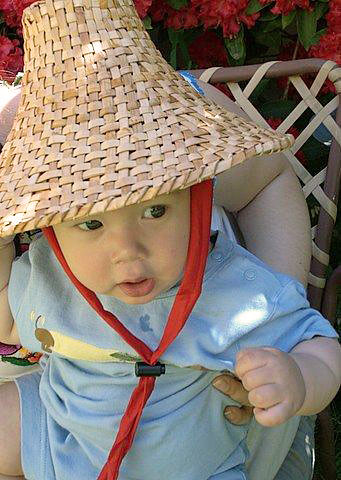 “Weaving is the core of my creative expression,” Lois said. “Guided by ancient hands and echoes of voices recently passed, I manipulate materials – the pieces determine their own dimension and form. I offer only the hands, while others are the heart and soul of my work. Printmaking is the documentation of my life experience, and that which I remember of my ancestors. If I keep telling the story, someone will remember and we will not be forgotten.”