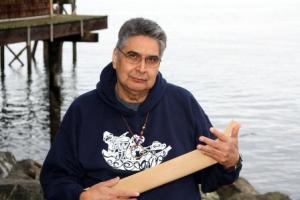 Philip H. Red Eagle is of Salish and Dakota ancestry and was born and raised in the Pacific Northwest. He is a published writer, canoe carver, publisher, editor, arts critic, educator, storyteller, museum curator, art gallery curator and cultural activist.

Mr. Red Eagle is one of the founders of the “Canoe Movement,” which has grown from a few canoes and fifty people in the early 1990s to over 100 canoes and over 6,000 people, annually. The success of this movement, which has come to be called Tribal Journeys, is evident not just in its rapid growth, but also in its effectiveness as a method of cultural renewal among the native peoples of the Pacific Northwest. Mr. Red Eagle has performed the canoe journey’s Copper Ring Ceremony since 1995 and makes each ring by hand. The current count is 4,500 rings given in this contract ceremony, which calls for no alcohol, no drugs, no violence and no sex during the journey. The ceremony has proven to be one of the successful elements of teaching the Canoe Way of Knowledge. The ceremony inspires both the young and old to make changes in their lives and to commit to year-round sobriety and nonviolence.

The second edition of Mr. Red Eagle’s novel, Red Earth: A Vietnam Warrior’s Journey, was published in 2007. Red Earth is written in an American style of writing called Mythical Realism. The book contains two novellas dealing primarily with the Vietnam War, Post Traumatic Stress Disorder (P.T.S.D.) and the difficulties of coming home from war. Mr. Red Eagle served in the Navy from 1967 to 1976, where he attained the rank of Petty Officer First Class as a Machinists Mate (E-6). He served onboard two destroyers on two separate West-Pac deployments to Vietnam. His service included eighteen months In-Country Vietnam up the Nha Be River as a riverboat mechanic (1970-71).

Mr. Red Eagle’s presentation is sponsored by the Department of American Indian Studies and the Office of Academic Affairs. It is free and open to the public. Mr. Red Eagle’s book will be available for purchase and signing at the event. For more information, contact Dr. Jane Haladay at haladayj@uncp.edu.

Please join us for a screening of “Canoe Way: the Sacred Journey” with a discussion afterward with Philip Red Eagle (Dakota/Salish), founding member of the Northwest Canoe Movement. Monday, March 22, 6:30 p.m. in the Native American Resource Center.

A description of the film from its website (http://canoeway.org/) explains that: “‘Canoe Way: The Sacred Journey’ documents the annual Tribal Journeys of Pacific Northwest Coast Salish people. Indigenous tribes and First Nations from Oregon, Washington, Canada, and Alaska follow their ancestral pathways through the waters of Puget Sound, Inside Passage and the Northwest Coast. Families and youth reconnect with the past and each other. Ancient songs, dances, regalia, ceremonies, and language were almost lost and are coming back. Witness first hand, through the words and images of a proud people, as they share the story of the resurgence of the cedar canoe societies – and how it has opened a spiritual path of healing through tradition.”