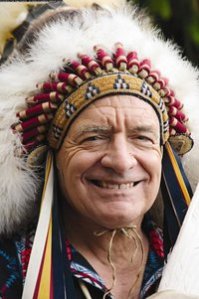 BRIEF RESUME- PHIL LANE JR.
Phil Lane Jr. is an enrolled member of the Yankton Dakota and Chickasaw First Nations and is an internationally recognized leader in human and community development. He was born at the Haskell Indian Residential School in Lawrence, Kansas in 1944, where his mother and father met and attended school. He is a citizen of both Canada and the USA.

…During the past 43 years, he has worked with Indigenous peoples in North, Central and South America, Micronesia, South East Asia, India, Hawaii and Africa. He served 16 years as Associate Professor and Founder and Coordinator of the Four Worlds International Institute at the University of Lethbridge, Alberta, Canada. Four Worlds became an independent Institute in 1995. As well, Phil is Chairman of Four Directions International, an Aboriginal company, which was incorporated in 1996 as Four Worlds’ Economic Development Arm.

With Phil’s guidance and applied experience, Four Worlds has become an internationally recognized leader in human, community and organizational development because of the Institute’s unique focus on the importance of culture and spirituality in all elements of development. Four Directions International, the Institute’s economic development arm, is lead by its President Deloria Many Grey Horses, and is dedicated to the development of sustainable economic enterprises that support wholistic, political, social, cultural, environmental, spiritual and educational development.

In 1977, Phil was named a Modern Indian Sports Great by the National Indian Magazine, Wassaja, for his record-breaking accomplishments in Track and Wrestling. He has extensive experience in his own cultural traditions, is an award winning author and film producer and holds Master’s Degrees in Education and Public Administration. His film credits include the National Public Television series “Images of Indians” with the late Will Sampson, “Walking With Grandfather”, “The Honor of All: The Story of Alkali Lake” and “Healing the Hurts”.

In August, 1992, Phil was the first Indigenous person to win the prestigious Windstar Award, presented annually by the late John Denver and the Windstar Foundation to a global citizen whose personal and professional life exemplifies commitment to a global perspective, operates with awareness of the spiritual dimension of human existence and demonstrates concrete actions of the benefit for humans and all living systems of the Earth. At this International event, in recognition of his lineage and long time service to Indigenous peoples and the human family, Indigenous Elders from across North America recognized Phil as a Hereditary Chief through a Sacred Headdress Ceremony. Other Windstar winners include: Oceanologist Jacques-Yves Cousteau, David Brower, Founder of the Earth Island Institute, Yevgeni Velikhov, Vice President of the Soviet Academy of Sciences, Wangari Maathai, Nobel Peace Prize Winner and founder of Kenya’s Greenbelt Movement; Akio Matsumura, Executive Director of The Global Forum, and Lester Brown, President of the World Watch Institute.

On November 11, 2000, Phil received the Year 2000 award from the Foundation for Freedom and Human Rights in Berne, Switzerland. Phil is the first North or South American person to receive the award, and he joins a select international group: the Dalai Lama of Tibet, Dr. Boutro Boutros Ghali, former Secretary General of the United Nations, and British Lord Yehudi Menuhin, musician and philosopher, have, also, received the award. The foundation says the award is in recognition of Phil’s “unique contributions to improve the lives and future hopes of native populations. It is primarily based on his most special merits of promoting freedom and justice for indigenous people by building human and spiritual capacity rather than opposing oppression directly and also on his international visionary initiatives among Native populations by healing the root causes of hopelessness and despair.”

On June 21, 2008, Phil was awarded the 14th Annual Ally Award by the Center for Healing Racism in Houston, Texas. Phil received the Ally Award for his national and international work in promoting freedom and justice for Indigenous Peoples by building human and spiritual capacity that focuses on healing the root causes of racism and oppression rather than focusing on conflict. The Ally Award is an annual award presented by the Houston-based Center for the Healing of Racism to honor the achievements of those who have worked hard to achieve harmony of all ethnic and cultural groups. Special emphasis on this award is for Lane’s dedicated work as one of the primary leaders in the resolution of Canada’s Residential School issue, which involved the sexual, physical, cultural, psychological, and emotional abuse of thousands of Aboriginal Peoples in Canada.

In 2008, Phil completed his three-year tenure as Chief Executive Officer of the United Indians of All Tribes Foundation (UIATF) in Seattle, Washington. The Foundation’s achievements include the launching of the first-ever Native American Film Festival, the development of a host of innovative education programs ranging from elementary and high school curriculum design and development, to adult education, early childhood education, and the recent launching of a $3.5 million holistic poverty-alleviation program model for urban Indigenous Peoples in Seattle.

Phil has now stepped into global leadership as Chairman of the Four Worlds International Institute (FWII) and Four Directions International. The Institute’s central program initiative is the promotion of The Fourth Way. The primary focus of The Fourth Way is to unify the human family by taking a culturally based, principal-centered path that transcends assimilation, resignation, and conflict. FWII has been working to develop a comprehensive, community-based development strategy that offers educational opportunity, IC3 Global Digital Literacy Certification, Digital Social Networking Capacity, and Participatory Media Training through a global networking initiative called “Indig.e.Net.” This digitally-based, globally unifying Indigenous communications and educational initiative, to be established at the Ciudad del Saber in Panama City, Panama in 2010, will serve as one of the key components for implementing The Fourth Way.