Dr. Aleticia Kyle Silverwood Tijerina, joined the Red Nation movement in 1983 as a young woman.  Leaving the East Coast where she was writing plays and performing, she headed to the southwest to pursue the dream of performance art with her own indigenous peoples.  Settling in Flagstaff, Arizona, she created the El Quetzalcoatl Teatro theater troupe and became involved in the political struggle of the Dine people living in Big Mountain Arizona who were in the fight of their lives to resist relocation off their traditional lands.  In 1983, she committed to dance for four years at the Sun Dance ceremony on Big Mountain that was hosted by the family of Louise Benally.  The Chief of the Big Mountain Sun Dance is Lakota Chief Leonard Crow Dog.  The Lakota dance was being conducted to help bring strength to the grandmothers and 100 families at Big Mountain who were being forced off their land by the US government.

Today, Dr. Tijerina continues to commit herself to social justice issues which impact her own indigenous peoples through organizational development projects.  In 2014, she created the Big Mountain Sustainable Housing and Land Development Project that is raising money to support green housing on the Navajo reservation.  Louise Benally was chosen as a recipient of a broader green housing initiative led by Community Rebuilds who is spearheading a project to support indigenous social activists and others through the green housing initiative. 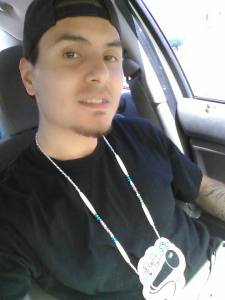 We will be joined with Che Jim

Che Jim (Dinéh/Odawa) was born in1989 and raised in Flagstaff Arizona, son to Alan Jim and Aleticia Tijerina and a father of 2. He has been involved in traditional native ceremonies his entire life, including the Big Mountain Sundance on the land of Louise Benally. Che, along with his mother and sister, Asdzaanazbaa, formed the project in order to build eco-friendly housing to those living on the reservation.

Che is currently working as a consultant for rehabilitation programs promoting sobriety for native people through native culture and traditional teachings. He and his family travel multiple times a year to different communities around the country to help in various spiritual events and show support to those in need.