Tonight we will be sharing about honoring our Uncle Billy Frank Jr. 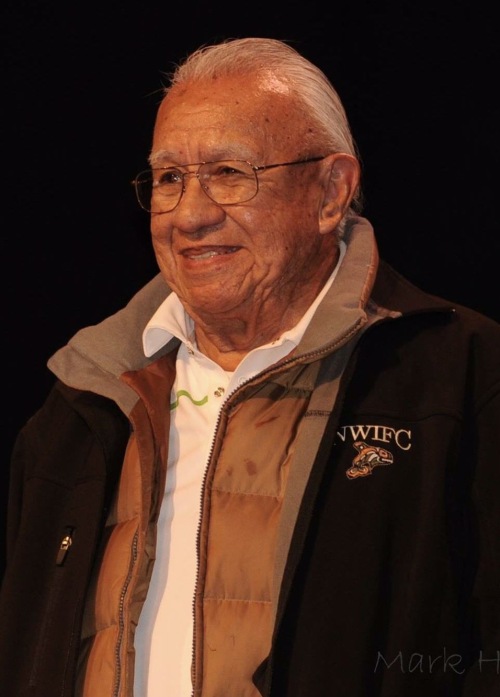 Mark Hoover’s photo of Northwest Indian Fisheries Commission (NWIFC) chairman Billy Frank Jr. (published 2017). Northwest Treaty Tribes, Peggen Frank There is presently a proposal pending before the Port of Olympia to rename Marine Drive west of Olympia’s East Bay as “Billy Frank Jr. Way”- with Petitions circulating in support of that action. Marine Drive ends in vicinity and site of the Protocols and Welcoming of Canoes for the respective Paddle to Squaxin Island Canoe Journey 2012 and the Paddle to Nisqually Canoe Journey 2016. The following is my statement in support of the Petitions for the renaming as circulated variously by Brian M Frisina, Freddie Xwenang Lane, Colleen Jollie, Peggen Frank and others:
“Billy Frank Jr. descends from honored 19th Century-born leaders of each the Squaxin Island and Nisqually Indian Nations whose ancestral boundaries touch in the waters of Budd’s Inlet west of Marine Drive. In December 2000, the Memorial and Life Celebration for “Jim” Heckman – the most significant non-tribal witness in the federal case of United States v. Washington (Boldt Decision 1974) – was held on East Bay Drive parallel to and in sight of the site where Heckman set up his Marine Drive USF&WS one-man office in 1962 near the KGY Radio tower and became one of Billy Frank Jr.’s closest friends and colleagues. Billy Frank’s last fishing arrest came not on the Nisqually River but rather at the floodgates connecting and separating Budd’s Inlet from Capitol Lake in Olympia. Billy Frank’s ‘formal schooling’ ended in attendance at Washington Junior High and Olympia High School – both in Olympia. That was noted when he was confirmed by the Washington State Senate in Olympia as a Trustee for The Evergreen State College to serve an extended term as Trustee from 1996 into 2003 under Governors Mike Lowry and Gary Locke. Additional to his work with 20 tribes’ Northwest Indian Fisheries Commission (NWIFC) from 1977 until May 5, 2014, Billy Frank, Jr. was appointed by Washington Governor Christine Gregoire to serve as one of the co-Chairs of the original Puget Sound Partnership (along with Bill Ruckleshaus and Jay Manning) to lead “the region’s collective effort to restore and protect Puget Sound” – the “deep fjord estuary” extending from the U.S.-Canadian border southward through the broader Salish Sea and southwesterly to the environs of Marine Drive in Olympia, WA. Under U.S. Presidents Carter and Reagan, Billy was named to the diplomatic team negotiating conclusion of the 1985 ratified Pacific Salmon Treaty between the U.S. and Canada directed at limiting harvest interceptions of salmon returning home to all the waters of Puget Sound – and in the early 1990’s Billy was instrumental in convincing Third World Nations in the United Nations General Assembly to finally ban the “walls of death” fishing nets of up to 20-miles in length in open ocean international waters. In November 2015. Billy Frank, Jr., posthumously was awarded the nation’s highest civilian honor, the Presidential Medal of Freedom (PMOF), by U.S. President Barack Obama. And BTW, Billy was a U.S. Marine. But more relevant to a renaming of “Marine Drive,” is the fact that Billy Frank, Jr., was a fisherman.”