In the Spirit of Cooperation with Colleen Jollie on “Make No Bones About It.” Oct 4th, 2015 at 4pm

Colleen Jollie earned a Bachelor of Arts degree in Native American Studies and a Master’s degree in Public Administration, both from The Evergreen State College. She is a descendant of the Turtle Mountain Chippewa Tribe. Ms. Jollie worked to create the Longhouse Education and Cultural Center at Evergreen; she helped found the Potlatch Fund and the Northwest Native American Basketweavers Association. Whether creating a new building or an organization, Colleen gathers people together to bring out ideas and create new realities. She describes this as “getting everyone into one canoe and pulling together toward a common destination.” She was deputy director at the Governor’s Office of Indian Affairs and the Tribal Liaison at the Washington State Department of Transportation.

NATIVE ALUMNI REUNION PLEASE JOIN US FOR AN INFORMAL POTLUCK GATHERING TO HONOR THE LEGACY AND FUTURE OF THE NATIVE PROGRAMS AT EVERGREEN. 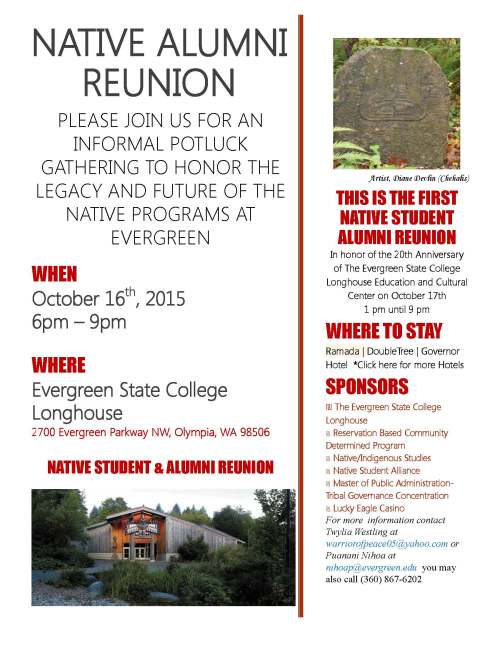 NATIVE ALUMNI REUNION
PLEASE JOIN US FOR AN INFORMAL POTLUCK GATHERING TO HONOR THE LEGACY AND FUTURE OF THE NATIVE PROGRAMS AT EVERGREEN.

Chairman Cladoosby is one of our most senior tribal political leaders in Washington State and the Pacific Northwest and his experience is reflected in his numerous commitments.  He is the President of the Association of Washington Tribes, Executive Board member of the Washington Gaming Association, past President of the Affiliated Tribes of Northwest Indians, has retained a seat on the National Congress of American Indians Vice Presidents’ Board, and is continually active in tribal and state politics. On an international basis he is the Co-Speaker of the Coast Salish Gathering, which comprises British Columbia First Nations and Western Washington Tribes.

Chairman Cladoosby has been instrumental in the domestic and international emergence of the northwest Indian country salmon and seafood industry.  Swinomish Fish Company buys and sells seafood products from tribal, national and international companies, continuing the “buy and sell native” motto of Indian Country. He shares a vision with the Swinomish Indian Tribal Community members to have a strong economic development plan that supports a way of life for today and future generations.

Swinomish is located in the Northwest and has grown our gaming investments from the early days of bingo halls to the full capacity of a gaming enterprise, and expansion into a new resort and golf course.  Like many tribes across the nation, our funds support governmental services and financial support for our community.

Brian and his wife of 35 years, Nina, have two daughters LaVonne and Mary, son-in-law Tylor, granddaughter Isabella and grandson, Nathanael.

Leader Challenges Higher Ed to Better Serve Native People
(Olympia, Wash.) How to improve educational success for Native Americans will be the theme of a lecture by Brian Cladoosby, current president of the National Congress of American Indians, and chairman of the Swinomish Indian Senate. He will speak on “Tribal Self-Governance and Indian Education” at The Evergreen State College, on Wednesday, February 26, in the Longhouse Education and Cultural Center, from 3:30 to 5:30 p.m.
Cladoosby’s lecture marks an enhanced effort by Evergreen to develop curricula and programs that meet the needs of Native students. Some 4.5 percent of current Evergreen students are Native American. The Longhouse Education and Cultural Center is the first Native longhouse built on a public college campus in the U.S. The college also offers a master of public administration degree with a concentration on tribal governance, a program of study on Native American and world indigenous peoples, and sponsors a reservation-based program where classes are offered locally and the study topics are determined in partnership with tribal authorities.
“We’ve come a long way in collaboration with Native communities, and we want to do more,” said Evergreen Provost Michael Zimmerman. Zimmerman cited the recent appointment of former Makah tribal chairman Micah McCarty to the new post of special assistant to the president for tribal government relations as a vital part of the college’s reinvigorated outreach.
Cladoosby’s visit to Evergreen will help faculty, students and the public understand what’s at stake as statistics continue to show Native students falling behind in high school and college graduation rates.
“Chairman Cladoosby’s stature as a national figure and his ideas on how to provide quality education that respects and addresses unique Native cultural and linguistic needs make him an especially important interlocutor on these issues,” said McCarty. “He’s an exemplary leader, and a collaborative partner for Evergreen.”

The National Congress of American Indians, founded in 1944, is the oldest and largest American Indian and Alaska Native organization, serving the broad interests of tribal governments and communities. As one of the most senior tribal political leaders in the Pacific Northwest, Cladoosby has been influential on Indian governance, environmental protection and educational advocacy for decades. He is the president of the Association of Washington Tribes, and co-speaker of the Coast Salish Gathering, which comprises British Columbia First Nations and Western Washington tribes.
The lecture is free and open to the public. Parking is $2.00. The Evergreen State College is located at 2700 Evergreen Parkway NW, in Olympia.

Brian Cladoosby, Chairman of the Swinomish Indian Tribal Community, was elected to serve as the 21st President of the National Congress of American Indians (NCAI) today in Tulsa, Oklahoma. NCAI, founded in 1944, is the oldest, largest and most representative American Indian and Alaska Native organization serving the broad interests of tribal governments and communities.

“I am deeply humbled to have been selected to serve tribes around the nation as President of NCAI,” said Cladoosby. “American Indian and Alaska Native communities are each unique with their own histories, cultures, economies and governmental structures. We also share the common goal of providing the best governmental services to our members. I look forward to working with all the amazing tribal leaders across the country to improve the lives of Indian people.”

Cladoosby has served on the Swinomish Indian Senate for 29 years and as the Chairman of the Swinomish Tribe for 17 years. He previously served as President of the Affiliated Tribes of Northwest Indians, representing 57 tribes in seven Northwest States. He has been the president of the Association of Washington Tribes for more than ten years.

ABOUT SWINOMISH
The Swinomish Indian Tribal Community is a federally-recognized Indian Tribe. Its 10,000 acre reservation is located on Fidalgo Island in Washington State.

Where the Salmon Run: The Life and Legacy of Billy Frank Jr.

I tell my people to get ready. Get your smokehouses back in shape. Don’t forget the ceremonies. That guy, the salmon, he’s coming back.
– Billy Frank Jr.
Read more about  Billy Frank Jr.