Ed Little Crow is Lakota, Dakota member of the Elders Council in S. Oregon, veteran of the Seige of Wounded Knee, 1973, father and poet. His years as a quiet, steady force in the Oregon communities within which he has lived, worked and prayed have etched themselves into the psyche of all he meets.

Roxanne Dunbar-Ortiz speaks in Olympia on May 4 and 5 about her new book An Indigenous Peoples’ History of the United States.

Roxanne Dunbar-Ortiz speaks in Olympia on May 4 and 5 about her new book An Indigenous Peoples’ History of the United States.

Native American feminist scholar and activist Roxanne Dunbar-Ortiz will be speaking in Olympia on Monday, May 4, and Tuesday, May 5, about her new Beacon Press book An Indigenous Peoples’ History of the United States. She will be speaking at Olympia Timberland Library on Monday, May 4, at 6:30-7:45 pm, and at the Evergreen Longhouse on Tuesday, May 5, at 7:00-9:00 pm. The events are free and open to the public. Download and print the poster for the May 5 Evergreen event:

The publisher describes the book: “Today, in the United States, there are more than five hundred federally recognized indigenous communities and nations comprising nearly three million people. These individuals are the descendants of the once fifteen million people who inhabited this land and are the subject of the latest book by noted historian and activist Roxanne Dunbar-Ortiz.  In An Indigenous Peoples’ History of the United States, Dunbar-Ortiz challenges the founding myth of the United States and shows how policy against the indigenous peoples was genocidal and imperialist–designed to crush the original inhabitants. Spanning more than three hundred years, this classic bottom-up history significantly reframes how we view our past. Told from the viewpoint of the indigenous, it reveals how Native Americans, for centuries, actively resisted expansion of the U.S. empire.”

“An Indigenous Peoples’ History of the United States provides an essential historical reference for all Americans. . . . The American Indians’ perspective has been absent from colonial histories for too long, leaving continued misunderstandings of our struggles for sovereignty and human rights.”
—Peterson Zah, former president of the Navajo Nation

“Roxanne Dunbar-Ortiz writes a masterful story that relates what the Indigenous peoples of the United States have always maintained: Against the settler U.S. nation, Indigenous peoples have persevered against actions and policies intended to exterminate them, whether physically, mentally, or intellectually. Indigenous nations and their people continue to bear witness to their experiences under the U.S. and demand justice as well as the realization of sovereignty on their own terms.”
–Jennifer Nez Denetdale, Associate Professor of American Studies at the University of New Mexico and author of Reclaiming Diné History

“An Indigenous Peoples’ History …pulls up the paving stones and lays bare the deep history of the United States, from the corn to the reservations. If the United States is a ‘crime scene,’ as she calls it, then Dunbar-Ortiz is its forensic scientist. A sobering look at a grave history.”
—Vijay Prashad, author of The Poorer Nations

“Justice-seekers everywhere will celebrate Dunbar-Ortiz’s unflinching commitment to truth—a truth that places settler-colonialism and genocide exactly where they belong: as foundational to the existence of the United States.”
—Waziyatawin, PhD, activist and author of For Indigenous Minds Only
More background on the book at http://www.beacon.org/An-Indigenous-Peoples-History-of-the-United-States-P1041.aspx

About Roxanne Dunbar-Ortiz
Roxanne Dunbar-Ortiz grew up in rural Oklahoma, daughter of a landless farmer and half-Indian mother. Her paternal grandfather, a white settler, farmer, and veterinarian, had been a labor activist and Socialist in Oklahoma with the Industrial Workers of the World in the first two decades of the twentieth century. The stories of her grandfather inspired her to lifelong social justice activism. Married at eighteen, she left with her husband for San Francisco, California, where she has lived most of the years since, although the marriage ended. Her account of life up to leaving Oklahoma is recorded in Red Dirt: Growing Up Okie. She has a daughter, Michelle.

Roxanne graduated, majoring in History, from San Francisco State College, a working class public institution, but was selected for History graduate school at University of California at Berkeley, transferring to University of California, Los Angeles to complete her doctorate in History. From 1967 to 1972, she was a full time activist living in various parts of the United States, traveling to Europe, Mexico, and Cuba. This time of her life and the aftermath, 1960-1975, is the story told in Outlaw Woman: Memoir of the War Years.

Roxanne took a position teaching in a newly established Native American Studies program at California State University at Hayward, near San Francisco, and helped develop the Department of Ethnic Studies, as well as Women’s Studies. In 1974, she became active in the American Indian Movement (AIM) and the International Indian Treaty Council, beginning a lifelong commitment to international human rights.

Her first published book, The Great Sioux Nation: An Oral History of the Sioux Nation and its Struggle for Sovereignty, was published in 1977 and was presented as the fundamental document at the first international conference on Indians of the Americas, held at United Nations’ headquarters in Geneva, Switzerland. That book was followed by two others in the following years: Roots of Resistance: A History of Land Tenure in New Mexico, 1680-1980 and Indians of the Americas: Human Rights and Self-Determination.  In over a hundred trips to Nicaragua and Honduras from 1981 to 1989, she monitored what was called the Contra War. Her book, Blood on the Border: A Memoir of the Contra War was published in 2005.

More background on the author at http://www.reddirtsite.com

The Olympia Timberland Library is located at 313 8th Ave SE. The Evergreen State College is located at 2700 Evergreen Parkway NW (the closest parking will be in the B Lot; turn to the left as you drive into campus, and walk the footpath to the Longhouse).

Download and print the poster for the May 4 Library event:

Download and print the poster for the May 5 Evergreen event: 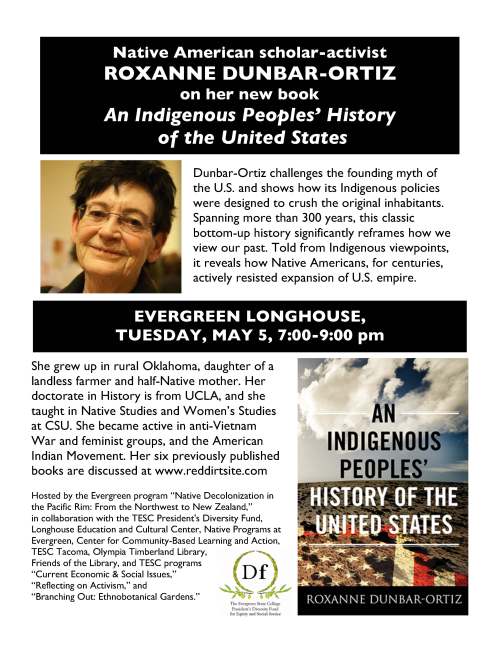