Mike Mease, co-founder of the Buffalo Field Campaign, on “Make No Bones About It.” September 13th, 2015 at 5pm

Learn what you can do to help the campaign and preserve the buffalo.

GoodShield Aguilar is of Oglala lakota and Pasqua Yaqui origin. he has been a visual artist as long as he can remember, but discovered music as a teenager and he has made music and art a grounding point from which cultural identity could be expressed and environmental causes could be addressed, particularly with the yellowstone Buffalo (www.buffalofieldcampaign.org). Aside from playing as a solo acoustic artist, beating a driving bass drum while strumming a guitar and singing original song with native “chants” and spoken word, he can also be seen around the country (and recently, across the great pond) with drummer, Johnnie Martinez and flautist, Mignon Geli. In this instrumental arrangement, they can range from Funk, Rock, Reggae, Latin Soul and anywhere in between the 7 generations….

Please contact Yellowstone Superintendent Dan Wenk and tell him to release the buffalo and to cease further capture operations.

America’s last wild buffalo are right now being trapped for slaughter along Yellowstone’s northern boundary. These capture for slaughter operations are happening even as state and treaty hunters are shooting buffalo that migrate into Montana.  Such management actions are driven by Montana’s bison-intolerant livestock industry, intolerance that is codified in the statute: MCA 81-2-120, a law crafted by the livestock industry that needs to be repealed.

This is what takes place in Yellowstone’s Stephens Creek bison trap, whereever members of America’s last wild buffalo population are being held torture in the squeeze chute of the trap.  Injuries are caused, families torn apart, as buffalo are run through the gauntlet then shipped to slaughter simply because cattle interests refuse to share the land.
Yellowstone is again being very secretive and refuse to disclose how many buffalo have so far been captured. Buffalo Field Campaign patrols in Gardiner were able to get a count of approximately 145 buffalo in an outer holding pen.

Yellowstone’s press release states that they aim to remove “800 to 900 bison that migrate out of the park’s northern boundary this winter to reduce population growth and to reduce the potential for a mass migration of bison into Montana.”

With all of the holes in their brucellosis argument, they are now killing ecologically extinct wild buffalo in the name of population control.

The Yellowstone buffalo are America’s last wild, migratory herds and the most important bison population that exists. They are the last to identify as a wildlife species and are ecologically extinct throughout their native range. They’ve been added to the International Union for Conservation of Nature’s Red List for being “threatened with near extinction,” and even Montana designates the species “in greatest conservation need” with conditions “making [bison] vulnerable to global extinction.”

Buffalo Field Campaign and Friends of Animals Wildlife Law Program filed an emergency rule-making petition (LINK) with the National Park Service and U.S. Forest Service to stop Yellowstone’s planned slaughter before it had a chance to begin. This petition was filed in September, and, to date, has been completely ignored by the government.

TAKE ACTION TODAY and please urge your friends, family and colleagues to do so as well.  Thank you!

Stephany Seay from The Buffalo Field Campaign and Brian Ertz from Wildland Defense speak with Raven Redbone host of “Make No Bones About It.”

* Update from the Field

Happy New Year Buffalo Friends! Let us hope – and act to ensure – it is a good one for wild buffalo.

At the time of this writing, the field remains quiet. But this will likely change very soon. Winter has finally arrived bringing frigid air and accumulating snow. The deepening snow will drive the buffalo down into lower elevations, where rifles and capture facilities await them. BFC and Friends of Animals Wildlife Law Program filed an emergency rule-making petition to stop the slaughter but the government has yet to respond.

Once the killing begins, scenes like this will be common. BFC photo by Stephany. Click for larger image.

All wild buffalo defenders must prepare for a busy season. It’s going to take all of us to apply the necessary pressure to stop the slaughter. You can begin by taking action to support Endangered Species Act protection for these gentle giants. You can also email and call Yellowstone National Park Superintendent Dan Wenk and tell him to stop the slaughter before it begins yell_superintendent@nps.gov / 307-344-2002.

WILD IS THE WAY ~ ROAM FREE! 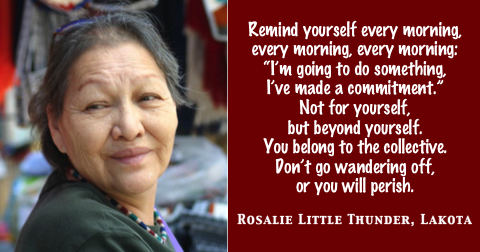 The Buffalo Field Campaign (BFC) is the only group working in the field, everyday, to stop the slaughter and harassment of Yellowstone’s wild buffalo. Volunteers from around the world defend buffalo on their traditional winter habitat and advocate for their protection. Our daily patrols stand with the buffalo on the ground they choose to be on, and document every move made against them.

Volunteers spend all day, from sunrise until sunset, watching and documenting actions taken against the buffalo. We run patrols from cars, skis and snowshoes to protect buffalo outside the park. Tactics range from video documentation to nonviolent civil disobedience.

BFC enjoys incredible support and participation from the local community. Residents allow us to post signs on their property designating them as “Buffalo Safe Zones.” We offer a fence repair service to mitigate damage caused by wildlife. Locals join us on our daily rounds, and many support our patrols with hot drinks and food.

All of our work happens because people are willing to take a break from their usual schedules and come help. Over 3000 people from all over the country and around the world have joined us in our log cabin on Hebgen Lake to help stop the buffalo slaughter. We feed and house all our volunteers in our cabin and Gardner satellite camp. (See news article- 4/24/03- Earth Day heroes: Amani Hays). Volunteers patrol for buffalo by skis, snowshoes, or cars. Everyone communicates by a network of hand-held radios, and also carries a video camera.